When you hit a tree…get back in the car

When my husband was 14-years-old he hit a tree driving his dad’s car. 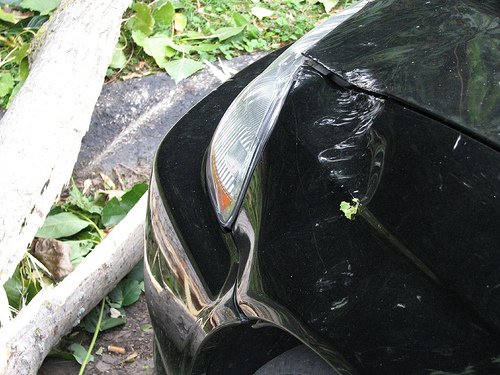 Bruce loved playing basketball in front of their garage. If a car was in the way of the hoop he was allowed to grab the keys and back the car down the driveway. On this particular day he was feeling overconfident and too quickly maneuvered between large trees on either side of the driveway…boom!

He quickly rushed inside where his parents were unaware of what had taken place.  In tears, he recounted what had happened promising to never drive again.  Upon seeing the damage, his father didn’t yell. He didn’t threaten. Instead he calmly told Bruce that they would get the car checked out.

The next day my husband wanted to play basketball again. He asked his father to back up the car.  “No”, he was told.  “You move it.  If you don’t get out there and begin driving again then this will stick with you for a very long time.  You need to get this behind you.”

His dad was wise enough to realize if Bruce didn’t get back in a car and conquer his fear then he would be paralyzed by failure. He also wanted to instill confidence. To let Bruce know that he trusted him.

A few weeks ago I “hit a tree.” I felt the weight of responsibility in caring for four boys. In my assessment I was failing.

Because of my failings, my boys were ruined. RUINED!

My wise husband (he gets it from his parents) encouraged me:

“Ruined is a strong word, Heather. It implies the boys cannot recover. Do you really think in just 6 years you have set their course for the next 80 years? They aren’t ruined.”

He was giving me a chance to get “back in the car.” To let go of my fear of failure. To see each day as a new opportunity to redeem the day before.

I wanted to pass on the gift of redemption to my boys. Remember that AWFUL doctors appointment I mentioned in a previous post (Re-tying Heart Strings)?

I was not as wise as my husband or father-in-law in how I handled that situation. When my boys “failed” I announced: “I will NEVER take all four of you to the doctor again!!”.

And yet, only two weeks after that doctor’s appointment from “h-e-double hockey stick” I found myself taking all 4 boys to the doctor again. Instead of assuming another failure. I decided to allow this to be a chance to redeem themselves. Their opportunity to “get back in the car.”

This time I set them up for success:

1. Chose a better time of day

I was able to get an appointment first thing in the morning. Much better than after school with a two-year-old who needed a nap.

If they did not do the aforementioned, they would not get a sticker/sucker from the doctor.

When all else fails…give them food.

As the mommy, I set the tone for the day. I decided to use a positive, happy voice. Smiled more. Laughed. Encouraged what good behavior they did exhibit.

They did it!! They redeemed themselves. You should have seen their faces after the appointment. They were so proud. Instead of feeling the shame of misbehavior & disappointment, they felt the joy of success.

It taught me a lesson. Not to give up so quickly when failure happens. Give myself a second chance. Give my boys another chance.

As we head into a new week, is there an experience your children can redeem? Do you need to give yourself a second chance this week?

“Jesus overcomes sin and death as well. This is our Christian faith. This is our hope. With Easter comes the good news of Resurrection, the excitement of second chances and the revelation of God’s greatest miracle: raising God’s Son to be with us!” -Rev. William Kramer

Peter who denied Jesus not once or twice but three times!:

“Yet, after his resurrection, Jesus went looking for Peter. You see, Jesus had died for Peter. He died so that Peter’s sins could be forgiven and so that your sin and mine could be forgiven. That is why Jesus forgave this man who had vehemently denied him. What is more, Jesus restored Peter and set him free. In a matter of a few weeks Peter preached the first Christian sermon. That sermon was about the forgiveness of sin. Out of his defeat, Peter learned something. He learned that God is the God of a second chance.” –Haddon Robinson