Remember? We’re on the same team. 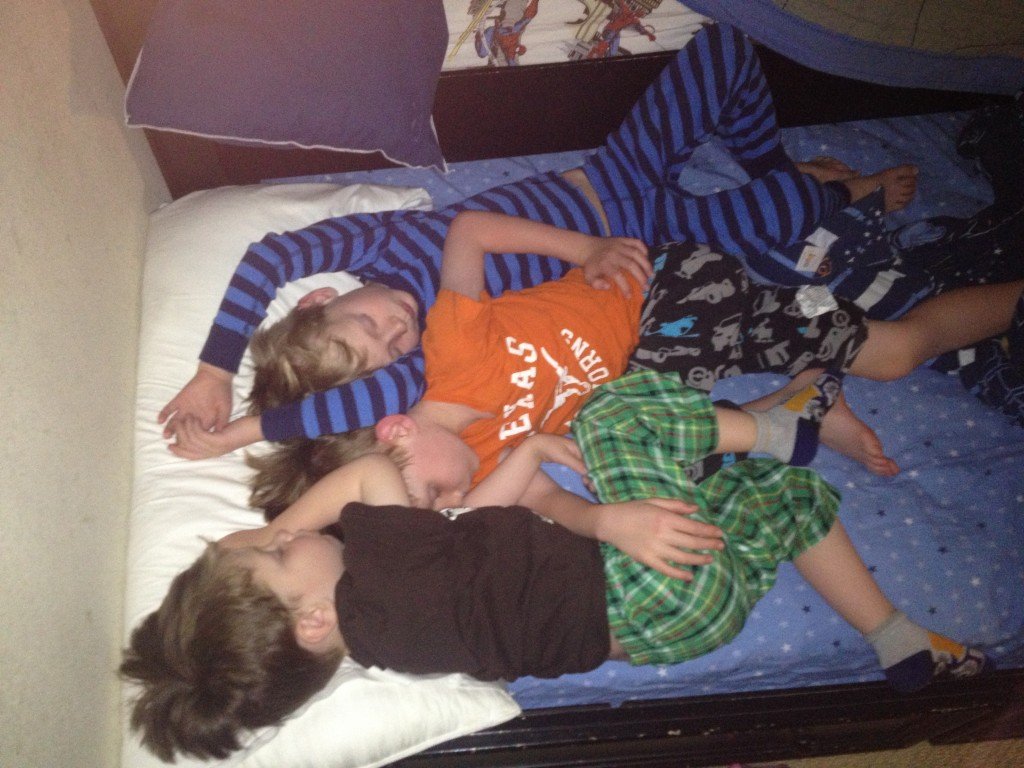 Pretty sweet, huh? Well just a few hours prior getting them into that bed was anything but calm & lovely.

Jumping on beds. Silly childish antics. “Moooom, he pushed me!!” Battles over pajamas.

Bruce and I have both been working too hard, staying up too late and by the end of the day our patience is long-past gone. The idealist in me cringes. I long for quiet and cuddly book reading on the bed and for the day to end with kind words instead of harsh correction.

So typically Bruce puts the oldest 3 to bed while I gently rock Knox & read him the simple story of “Goodnight Moon.” I avoid the madness. Retreat to the sweet baby smells and softness and cling to every ounce of “rocking chair” moments with my last baby.

But the other night Knox went to bed early, so I bravely opened the door to what is known as the “spiderman room”.  The boys were thrilled to have me join in. Amazingly as I laid down on the bed they laid down as well. The arguments changed from  “he hit me” to “I want to be next to mommy!”.  Once I was covered in “boy” on all sides, Bruce started reading this Aesop fable:

“A lion often prowled about a pasture where three bulls grazed together.  He had tried without success to lure one or the other of them to the edge of the pasture.

He had even attempted a direct attack, only to see them form a ring so that from whatever direction he approached he was met by the horns of one of them.

Then a plan began to form in the lion’s mind.

Secretly he started spreading evil and slanderous reports of one bull against the other.  The three bulls, distrustingly, began to avoid one another, and each withdrew to a different part of the pasture to graze.  Of course, this was exactly what the lion wanted.

One. by. one. he fell upon the bulls, and so made easy prey of them all.”

Hmm…lion looking for an opportunity to destroy? Reminds me of something…

“Be alert and of sober mind. Your enemy the devil prowls around like a roaring lion looking for someone to devour.” 1 Peter 5:8

Some ONE. Looking for some ONE to devour.

But what if he can’t get to that one because that one is surrounded by many?

In our first year of marriage,  Bruce & I quickly learned we needed keep a “teamwork” mentality. Frequently we’d remind one another with the simple words, “Remember? We’re on the same team.”

I know Bruce wants the best for me & I want the best for him. God put us together so we can do His best work. When we start attacking one another, it all goes south quickly.

The same is true now for our family of 6. The more time we spend focusing on our individual rights and gripes the more miserable we become.

Yet when we have a common focus…we come together as the “Team MacFadyen”, then we conquer the challenge. 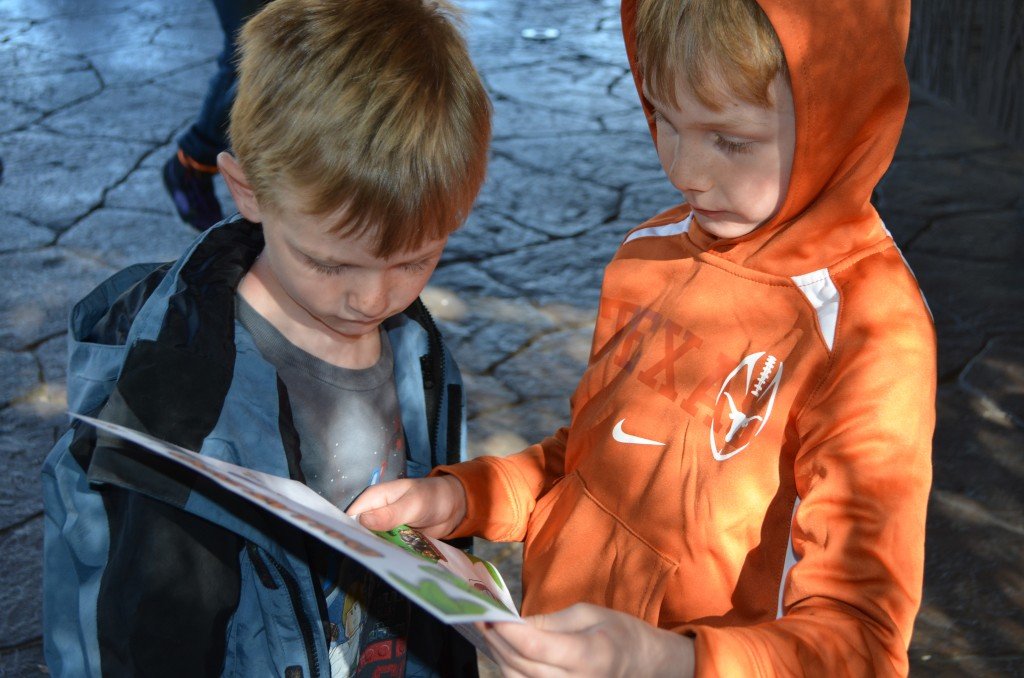 Recently my heart has been burdened for the division I see in the church. Christ’s bride splintered. For the first 1000 years of Christianity there was one church. Look what has happened in the last 1000 years…

Isn’t that exactly what the “lion” wants? To spread evil and slanderous reports about one another? To cause us to draw away from each other into our own “pastures”?

I’m not naive. I know these splits happened for “justifiable” reasons. God knew the church would fracture into thousands of pieces.

In the week leading up to his death Jesus spent some time talking to the disciples about the final days…the end of time:

At that time many will turn away from the faith and will betray and hate each other…(Matthew 24:9-10)

And yet after modeling selfless, servant leadership, washing the disciples’ feet, these were his instructions:

Loving one another. Not considering any team member as more important than another.

Just like I tell the boys before heading toward a task: “Let’s circle up. Put our hands in the center. On the count of three…one, two, three…Team MacFadyen!”

Husbands/wives, Facebook friends, the church: Let us circle up.  Love one another…so others may know Him. Because God is love. 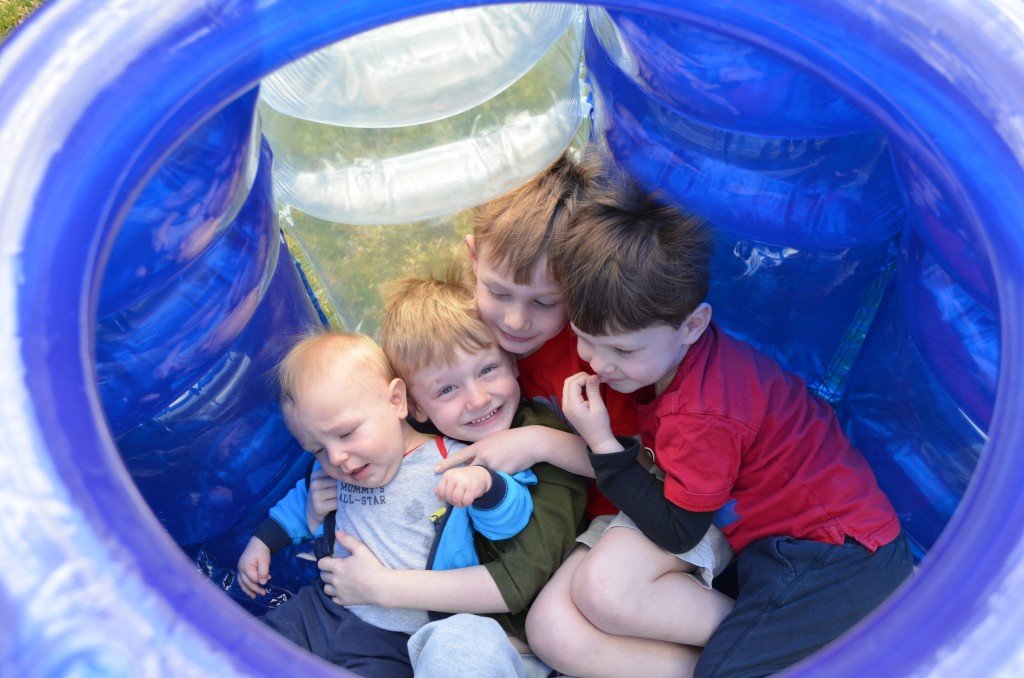