lessons from a baby tooth…

No matter how advanced his math skills or reading ability, Quade’s been kinda slow in the whole loosing teeth part of childhood. Until last week he’d only legitimately lost his bottom two middle teeth (well, there was also one lateral incisor which came out after a fierce daddy/son-wrestling match…but I don’t know if that officially “counts”).

Really I haven’t been too concerned about his delayed tooth loss. Partly because his baby teeth are cute (don’t elementary aged boys kinda start looking like thugs with all those missing and mismatched teeth?) and partly because my dental history included some pretty stubborn baby teeth.

More than once I remember going to the dentist to have a dangling tooth removed with my full-grown adult tooth boldly making its presence known. So perhaps he gets his “stick-around-for-a-long-time baby teeth” from me.

During dinner last Thursday night Quade turned to me with his mouth gaping, finger wiggling a loose top middle tooth. My 19-year-old nephew, Stephen, was eating with us and began to advise Quade on how to quickly and painlessly remove the tooth. After weakly attempting his cousin’s method, he turned to me. I offered to gently pull the tooth to see if it would be coming out any time soon.

After my brief evaluation I determined it was hard stuck (my diagnosis slightly skewed by my own childhood biases…). There was no way it would be coming out tonight.

Normally Quade would have been glad to hear “blood & pain” being put off for another day. But he knew the next day he would stand in front of a large crowd of teachers, parents, children, grandparents, aunts, great uncles…and recite a poem.

There’s nothing like the thought of losing a tooth in front of a large group of people to bite the bullet and choose pain now over risk & humiliation later.  So he asked me to try to pull it again.

But no amount of tugging on my part worked.

So all the boys headed upstairs for bed…Stephen, a great nephew, went along to help Bruce get the little guys ready.

While I loaded dishes into the dishwasher I heard Quade running down the stairs, “Mommy, mommy! It came out! My tooth. Stephen threw a towel at my head and my tooth popped out!! Can you believe it?”

I couldn’t believe it.

He handed me that tiny tooth. I rolled it around between my fingers barely able to see how it had hung on so tight against my pull. That’s when I was reminded of the significance of this tooth. 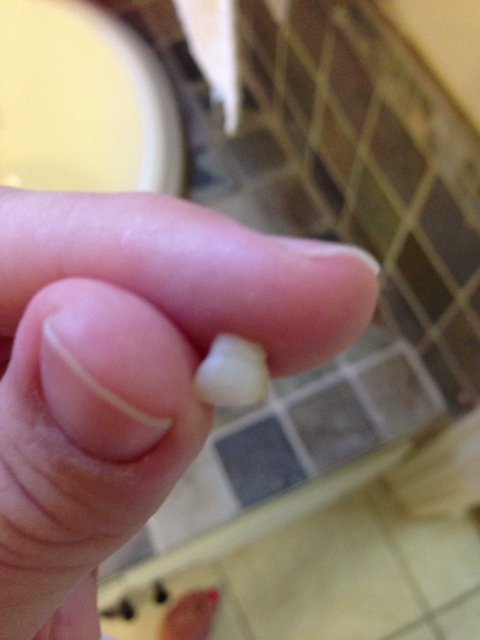 A tiny chip in the right bottom corner.

Barely noticeable after 7 years of his chopping on apples and chicken nuggets…it had almost smoothed out flat.

You see, Quade was a ridiculously early walker. He took his first steps (unprompted by us) at 8 months. He was full-fledge walking at 9 months. And at 10 months of age as he walked past our bathtub he tripped, fell and chipped one of his few teeth on the tile.

As a first time mom you can only imagine how my horrible I felt about his injury. Babies shouldn’t have dentists. They definitely shouldn’t need to get x-rays.

But later that day I took my 10 month old to his first dentist appointment to make sure there wasn’t any damage to the nerve.

I’m sure I cried. 1) I’m a notorious crier 2) my baby was hurt and I didn’t stop it from happening.

But do you know what I realized last Thursday when I held that baby tooth in my hand? His fall wasn’t a permanent mistake. He was learning to walk and he tripped.

Yes, he got hurt and yes, it even left a mark he carried for seven years. But then one day. That mark went away.

His new adult tooth will come in and unless we tell the story of his 10-month-old self chipping a tooth, no one would ever know.

Today alone: an apple core one son left in a potted plant that attracted fruit flies and an animal who dug up the plant, a brother swinging a toy and hitting another brother in the face, harsh words spoken between brothers over who gets to hit the baseball first…

Wasn’t it a mom friend who told me how she wishes she could go back to the issues of small fights over toys? How during a dinner the other night she and her husband sat with another couple (both families with sons in high school) and discussed K2. I ignorantly asked, “K2, like one of the Kanakuk camps?”. To which she informed me, “No, K2 is an odorousless drug kids are using now”.

So that lost tooth was a perspective reminder. Those things, which seem so very important and permanent at the time, are not quite as permanent as they seem.

The weight I put on myself to be everything for my kids and make sure they never fall and never trip and never chip teeth?

Well, maybe it’s better they fall on my watch. Maybe it’s best they make those mistakes while I can help them round out the broken places and take sturdier steps in the future. Direct them to the Hand that never falters.

Here’s some ultimate perspective…these bodies are not ours forever.

We have better ones waiting…the glorified version. Like baby teeth falling out and permanent ones coming in, this life is not ours to cling to. We really have no reason to stress over ever chip and broken piece (says the gal whose left foot still aches from a year ago fracture).

Perfect is coming and its more than permanent, it’s eternal.

So, let’s hold tight to that truth. May we love our babies well today. Show them Christ’s sacrificial love. Help them stay on the path of righteousness, but know in their walks they may stumble. They may fall. Love them through it. 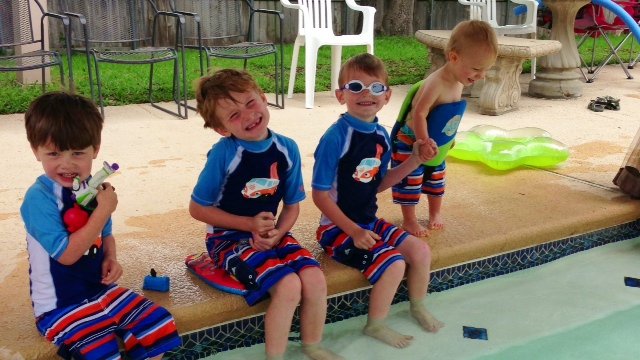